Annual Meeting of Heads of Mission 2020 and 2021: a traditional meeting despite the pandemic

Finland’s Ministry for Foreign Affairs organizes a three-day meeting for all Finnish ambassadors annually. The meeting is traditionally held at the end of the Summer when most of Finland’s 120 ambassadors are in Finland and can meet face-to-face. As the Covid-19 pandemic hit and restrictions tightened, an alternative solution had to be designed for the meeting.

The solution was Miltton Contactless

The strength of the Miltton Contactless concept is the ability to adapt it completely to the customer’s wishes. The challenge was to connect people around the globe, some with good network connections, others not. It was necessary to make the event safe for e.g. the Finnish President and Prime Minister to perform in. The event had to be an engaging and dashy live broadcast.

In 2020 in the Small Parliament

In August 2020, Miltton held a three-day meeting for Ambassadors, in a separate studio built in the Small Parliament. Finland’s top management came to give speeches, in addition to which we organized several interesting panel discussions and inspirational speeches. The Ambassadors attended the meeting remotely.

The 2021 meeting was broadcasted from Merikasarmi, Helsinki

In August 2021, the Ministry for Foreign Affairs was moving back to the premises of Merikasarmi in Helsinki, and we were honored to host the three-day meeting of Ambassadors from there. Two days before the meeting, we built two separate studios in the historic building, in which we broadcasted the three-day live event to all Finnish embassies around the globe.

The ambassadors were able to communicate with guests via a two-way video connection and website. In addition, various interactive poll questions and presentations were added to the speeches, and a group workshop was also organized for the participants. The program of the meeting could also be viewed afterwards if time zone challenges got in the way of following the live broadcast in Finnish time. Despite the time difference, there were almost 120 people continuously online for most of the three days.

The client was responsible for designing the program and contacting speakers. Miltton’s expertise was leveraged to optimize the planned program for a virtual environment. In addition, we were responsible for the production and technical implementation of the entire event, as well as the visual look. 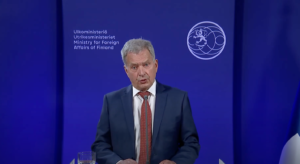 Annual Meeting of Heads of Mission 2020 and 2021
Finland's Ministry for Foreign Affairs
Share
Several good content sections and above all a technically very successful virtual meeting, thanks to the organizers.
A meeting attendee