Sanna-Mari Jäntti, who works as Director of Strategic Initiatives for the City of Helsinki, will join Vapaavuori to lead the new urban affairs business and support Miltton’s growth. Vapaavuori, on the other hand, will start as Miltton’s Board member and part-time Senior Advisor. Both will take on their new roles in the beginning of August.

“To understand the impact of accelerating change in the world and respond to it, we must understand cities. Climate change is the most critical megatrend of our time and digitalisation is reshaping the world in ways never before possible. Both of these, however, as well as most transformative megatrends, are more tangible in an urban environment and context. Technological development will accelerate and most importantly scale up in cities. The transformation of work and other global phenomena are made concrete in cities. The effects of urban environments resonate almost everywhere, making urbanisation a central framework for other megatrends,” Vapaavuori says.

Urban issues are networked and global in nature, widely impacting the abilities of companies and organisations to succeed in a shifting operating environment. Recruiting Vapaavuori and Jäntti is set to speed up Miltton’s internationalisation.

“With Janne at the helm, we can offer our clients unique international insights on how urban environments are planned and directed, which questions lead the decision making and affect the life of an entire city, and how international cities and their networks function. During his mayoral term, Vapaavuori has become valued by the most dynamic and significant city networks in the world. We are happy that he will be joining our growing bunch of Milttonees,” says Mathias Järnström, CEO for Miltton Group.

Miltton celebrates its 20th anniversary this year. Over the decades, the company has systematically recruited top experts from all areas of society with the goal of offering its customers a complete understanding of societal development and changes in the business landscape. Miltton’s experts have backgrounds in, for example, politics, design, media, culture, finance, business, diplomacy and creative industries. Together they analyse and shape customers’ businesses and communications in ways that enable them to flourish in a complex, ever-evolving operational environment.

“Miltton is an energetic, inspiring, and ambitious company. I have dedicated a significant part of my career to improving life for urban communities and residents. Now, as a part of Miltton and together with my versatile new colleagues, I can apply what I have learned from working with businesses, cities and different organisations around the world,” Vapaavuori adds.

Taking into account the financial figures of 2019, Miltton is among Europe’s 15 biggest communications and public affairs consultancies, and the company’s expertise and service portfolio is unique internationally. In addition to Helsinki, Miltton currently has offices in Tallinn, Stockholm, Brussels and Washington, DC. 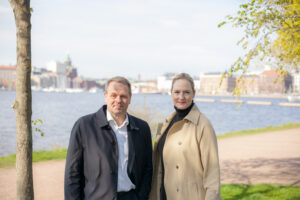 Jan Vapaavuori
Before being elected the first Mayor of Helsinki, Jan Vapaavuori served as Minister of Economic Affairs, Minister of Housing and Urban Development, and Vice President of the European Investment Bank. Vapaavuori is a member of the World Economic Forum’s Global Future Council, member of the Bloomberg New Economy Forum City Council, and will start as a Senior Advisor in the real estate development company NREP in August 2021.

Sanna-Mari Jäntti
Sanna-Mari Jäntti has previously worked as the Director of World Design Capital 2012. She was also a Senior Advisor at Miltton Networks and directed the Guggenheim Helsinki initiative in Finland. At the City of Helsinki, Jäntti has been in charge of strategic initiatives and internationalisation development, and acted as the secretary of the city’s Board.