Beanit is an innovative food company on a mission to change the way we eat. Challenger brands often try to defeat their opponent by pointing out their flaws, but Beanit wanted to do things differently. Instead of approaching its competitors with fists first, Beanit opened its arms wide and gave the meat industry a big warm hug.

​​Objective: ​​Beanit makes plant-based meat alternatives out of Nordic fava beans. As the market leader of a fast-growing category, the company takes pride and responsibility in driving the normalization of plant-based diets among the masses.

Beanit was already a well-known brand among the innovators and early adopters of the plant-based category – mainly vegans and vegetarians. However, as the majority of Finns remain meat-eaters, or at most flexitarians, Beanit knew that in order to meet its ambitious growth objectives, the brand would need to move from the niche to the mainstream. It needed to become a viable option even in the eyes of the most meat-hungry consumers.

​​Insight: Typically the producers of plant-based meat and dairy alternatives make their case by aggressively pointing out all that is wrong with the animal-based alternatives. Following its brand strategy, Beanit wanted to break free from this pattern of juxtaposing meat and plant proteins, and instead be a force of unity, building a bridge between the traditionally opposing views.

​​Together with Miltton, Beanit conducted research to find out how Finnish people really feel about the divide between meat and vegetarian food. The survey discovered that 64% of Finnish people find the discussion around different diets excessively polarised and that 60% find the attitudes toward eating meat excessively judgemental. The survey validated our insight: in a category where everyone is busy putting up a fight with the opponent, the truly fresh approach would be to give the opponent a big kiss on the lips.

​​Creative solution: ​​The campaign message was controversial, yet simple: “If you eat meat, what if you only did it on Saturdays?” After all, it was only a few decades ago when meat got dethroned from the status of a treat for the special occasions to the mundane food item of everyday.

On Saturday 13.2. we launched “Meat Saturday” (Lihalauantai in Finnish) – the weekly occasion dedicated for enjoying meat with a clean conscience and leaving the other six days of the week for vegetarian food such as delicious fava beans. Instead of bashing the meat industry, we kindly reminded people that you don’t need to give up meat altogether in order to eat less of it. ​​

The quirky approach together with the interesting research findings attracted the media’s attention and earned national and international press visibility for Meat Saturday. The campaign ran as paid advertising on print, outdoor, Spotify, social media and influencer channels.​​

​​The campaign was also a commercial home run as it was immediately followed by a significant sales lift. 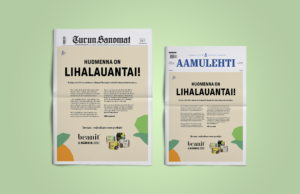 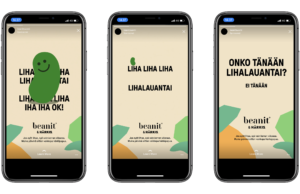 Share
Previous case
Employer communications for the City of Helsinki
Next case
Maali eikä määränpää – no paint, no gain, K-Rauta’s campaign for a change in scenery