Too many young people feel like it’s not easy to dream of a good future. The crises of our time will have an influence on younger generations. With this campaign, Finnish committee for UNICEF wanted to ensure that the younger generations of today don’t become marginalized tomorrow – we wanted to make them visible.

The challenges faced by children and young people have only increased during the pandemic. UNICEF wanted to bring the younger generation visible when decisions concerning their future are made in Finnish municipalities, since many of these challenges can be influenced on the municipality level. Children and young people’s importance often shows in speeches but, with the help of this campaign, we wanted to bring their challenges to the municipality council members’ agenda – and put their words into actions.

New municipality and city council members had just been elected in Finland, and their council period was about to start. We saw this as the perfect moment to influence on the decision makers’ council period agenda, and shine light on UNICEF’s work done in Finnish municipalities. That’s why we decided to launch the campaign at this moment.

We first had to make young people disappear in order to make them visible. A day before the launch, young influencers disappeared from their social media platforms, and in outdoor ads we had images of young people fading away. The following day, this puzzling disappearance turned into a campaign to challenge decision makers in municipalities and cities to make young people visible during their council term – put words into actions.

The campaign was designed together with young people since the beginning. Planning started with a workshop together with young people, to define the most severe challenges in their life, and to discuss the social media influencers to be selected as the faces of the campaign. Based on the workshop we made a questionnaire which reached more than 1,000 answers from all around Finland.

We created a visual image for the campaign and arranged a photoshoot – of course, together with young people. We also helped with editing the outdoor ad and social media influencers’ materials.

The campaign reached widespread attention, both on social and traditional media, and activated municipality council members to spread the word and list what their priorities for the council term, based on themes defined by the young people themselves. A total of 23 media outlets covered the theme, and an expert from UNICEF and two representatives of the younger generation talked about it at a national morning show. On social media channels we reached over 1.6M views. 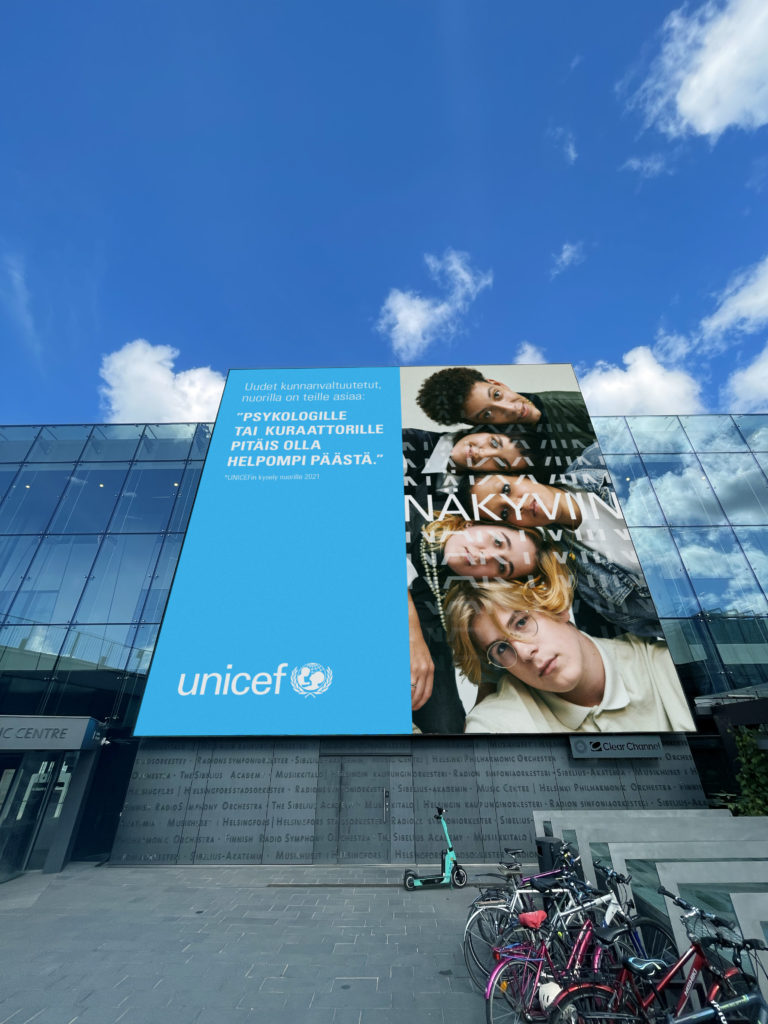 Näkyviin
Finnish committee for UNICEF
Share
Näkyviin (Finnish for “to become visible”) was the first big campaign around the work UNICEF does around child rights in Finnish municipalities. It was great to see how children’s and young people’s issues in Finland became visible and how decision makers committed to promote them in their work. It was important that the entire campaign was designed together with young people, to truly make them heard.
Laura Seppälä, Head of Communications, Finnish Committee for UNICEF